Following the trustee elections in October 2018, close to half of the trustees elected were new to the role. This presents both an opportunity and a challenge to the BC School Trustees Association. The organization’s mission is partly driven by the belief that:

“Helping to build effective Boards of Education by providing development, communications and support services continues to be a vital role.”

Boards of Education are often one of the larger employers in the community. In short, there is much to learn in order to effectively execute the role of school trustee.

The Trustee Academy in 2018 was the first large event for new trustees and many of the sessions offered were directed to those who were new to the role. Later in January a series of Regional Workshops on Leadership will be offered and these, too, will be of great benefit to new trustees. But on January 25 and 26 a specific session for new Trustee Orientation was held in Richmond. Given the fact that close to 300 participants registered for the event, it is clear the topics presented were of interest! 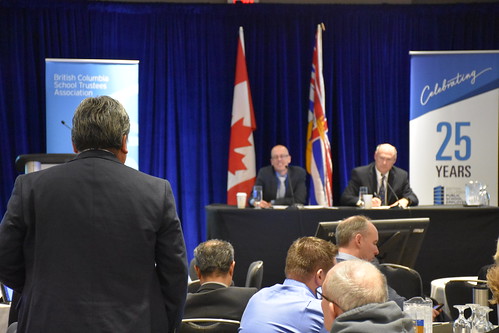 The conference was a collaboration between BCSTA and the BC Public School Employers’ Association. Demonstrating this collaboration, the first morning began with Alan Chell, BSPSEA Chair, and Gordon Swan, BCSTA President, welcoming the participants. The two foreshadowed the program for the following two days, with content on student success, governance, mandate and services and labour relations 101. The first day focused on providing information about structures, services, roles and processes in BCSTA and BCPSEA.

Mike Roberts, CEO of BCSTA, along with Stephanie Higginson, BCSTA Director, helped new trustees see the big picture of a board’s work – focusing on student success. Important distinctions between the board’s role in governance and in advocacy were outlined. Reference was made to the Learning Guide, where more details about these, and other important areas of knowledge for trustees, are available at the click of a mouse.

Later in the morning, Dave Byng, former Deputy Minister of Education in BC, worked with trustees to help them understand the landscape: what are the respective roles of British Columbia’s boards and the province of British Columbia. Trustees hear about co-governance, but how does that actually play out in school districts? Specifics around funding, budget development, priority setting and policy development were provided. Byng also offered trustees information to help them maneuver the complex relationship between and among boards of education, district management, the minister of education and ministry staff.

One important role of boards of education is acting as employer. Renzo Del Negro, CEO of BCPSEA and Alan Chell, Chair of BCPSEA, made a presentation explaining the role of BCPSEA and how it fits in the structure of the Public Sector Employers’ Council (PSEC). They emphasized the role of the corporate board vs. the role of individual trustees and the distinction between governance and operations in human resources and labour relation contexts.

Adding to this knowledge, Janet Stewart, COO of BCPSEA, Deborah Stewart, ED Corporate Services and Communications, and Renzo Del Negro, CEO, provided trustees with an overview of the services provided to boards of education from the employers’ association and bargaining agent.

The second day of the conference focused more on labour relations, legal considerations, the role of trustee representatives to BCPSEA and the collective bargaining process. Topics included the responsibilities of representatives to the BCPSEA, what trustees need to know about Labour Relations and what trustees need to know going into provincial and local bargaining. With bargaining with the BC Teachers Federation just around the corner, this was a particularly timely area of knowledge for new trustees to gain. Speakers included Alan Chell, Gordon Swan, Renzo Del Negro, Janet Stewart, and BCSTA’s Legal Counsel, Audrey Ackah Audrey Ackah.

Several presentations from the event can be downloaded on the HUB.

The session ended with some fun! Staff and trustees delivered a ‘test’ of what trustees had learned about the BCSTA and BCPSEA over the two days. It turns out trustees can be highly competitive and the exercise proved to be entertaining. Comments from trustees and other participants were very positive and they expressed appreciation for the opportunity to learn and engage with colleagues at this very successful event.