Over the years 2013 to 2016, the Early Development Instrument (EDI) results in School District 84 (Vancouver Island West) showed that 53% of children in the community were vulnerable on one or more of the five scales (physical health and well-being, language and cognitive development, social competence, emotional maturity, and communication skills and general knowledge).

In 2016, members of the Vancouver Island West (VIW) Early Years Table (formerly the Gold River Early Years Inter-Agency Table), concerned about the results, began to examine factors contributing to this vulnerability. It became clear that there were big gaps in access to services for children and families in the area. Given the remoteness of the area, the distance some families needed to travel for services, and the lack of finances for this kind of travel, children were simply not getting services. 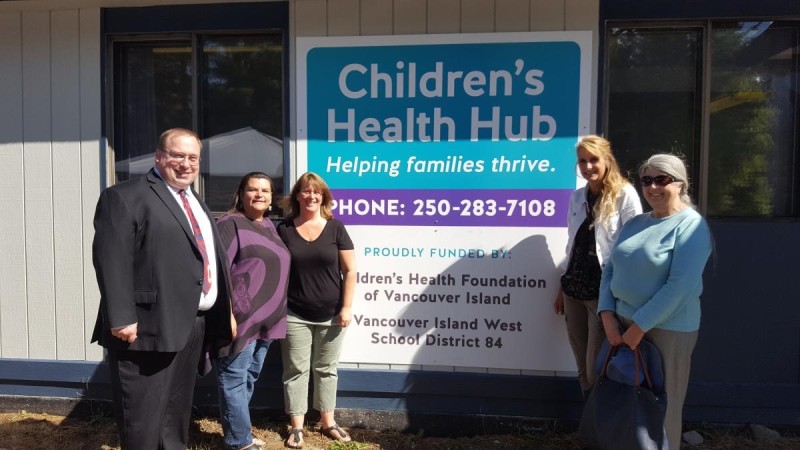 The Hub is located in the old School District Office and the space and its maintenance are provided by the school district.  The school district also administers the finances for the Hub.  The growth of the Hub is overseen by a steering committee and a Navigator.  A second project funded by Island Health Wellness Grants engaged in research to further examine childhood resiliency in the region. The work of this project now informs the growth of Children’s Health Hub.

Carrie Tarasoff, Children’s Health Hub Navigator, speaks of the success already experienced by having the Hub in place.  Where families had previously been unable to take a full day off school and work to travel to Campbell River – a three hour drive back and forth – children now can receive a variety of services right in Gold River.  As the Navigator, Carrie is also able to connect with families who may not have telephones or transportation.  She can arrange appointments and rides to make sure that children who previously missed out on health care are now connected.  Carrie says the Hub is having a tremendous impact for families.  “Because we aren’t a traditional organization, we can accommodate families who are late, or have trouble accessing transportation, or who face communication barriers, or other problems. Previously, if you were late to a Health Unit, your appointment may be cancelled or rescheduled. At the Hub, we do our best to make it happen.”

In their April 2018 Newsletter, The Children’s Foundation of Vancouver Island tells the story of Samuel (shared with permission).

“At 10 years of age, Samuel’s hearing issue was finally treated. Although Megan Williams, audiologist, had assessed Samuel at his school in 2016, his family wasn’t able to make it to booked appointments in Courtenay.

It wasn’t until Megan saw Samuel and his mother together at the Gold River Health Hub, that she could introduce the idea of hearing aids.

The Gold River Health Hub opened in September 2017 – thanks in part to your generous support of Children’s Health Foundation of Vancouver Island. Located right on the local school property, the Hub provides a place for children living in rural and remote communities to meet with a range of care providers. This includes occupational therapists, nutritionists, physiotherapists and audiologists – like Megan.

Without the Hub, families had to travel to Campbell River or Courtenay for what is often a ten-minute appointment with Megan. That meant missed school or work – and an added financial strain on families. Megan found that many families just weren’t able to make it. Now that she sees children once a month at the Hub, appointments are rarely missed.

Today, Samuel is doing so much better in school. He’s not as frustrated as he used to be – because he can actually hear what people around him are saying!“